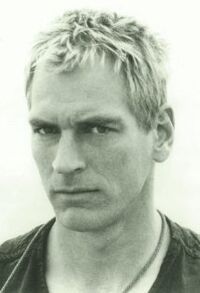 Julian Sands plays the young Henrik Vanger in the remake of The Girl with the Dragon Tattoo.

British actor Julian Sands came to the attention of NBC when the network cast him in the made-for-TV The Sun Also Rises (1984) (TV) and then with Anthony Hopkins in the television film "A Married Man" (1983). Sands also got notice in his very small roles in Privates on Parade (1983) and The Killing Fields (1984). It wasn't until his funny and romantic role opposite Denholm Elliott in A Room with a View (1985) and then his unusual role in Gothic (1986) that audiences noticed him and were fascinated with his good looks and unusual but sometimes chilling appearance. He continued work on screen in Vibes (1988), Impromptu (1991) and Steven Spielberg's Arachnophobia (1990), until his most remembered role as Warlock (1989), directed by Steve Miner. The film was such a major success that he returned for the terrifying sequel, Warlock: The Armageddon (1993). His other credits include Naked Lunch (1991), Tale of a Vampire (1992) and the title role in Dario Argento's The Phantom of the Opera (1990) (TV). Sands has more recently been in Stephen King's "Rose Red" (2002) and is also occasionally seen on the English stage.