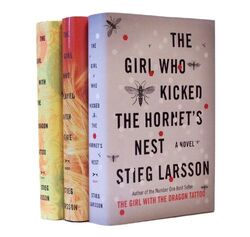 The Millennium Trilogy is an award-winning series of three bestselling novels written by the late Stieg Larsson. These novels include The Girl with the Dragon Tattoo (2005), The Girl Who Played with Fire (2006), and The Girl Who Kicked the Hornets' Nest (2007). The novels are affectionately referred to by fans as "Dragon," "Fire," and "Hornet" respectively.

At the age of 15, Larsson witnessed the gang rape of a young girl, leaving him understandably disgusted by sexual violence. The experience haunted him for the rest of his life, and he never forgave himself for failing to help the girl. The victim's name was Lisbeth - which is the origin of the name he gave the young heroine of the trilogy, herself a rape victim. This memory was the inspiration for the theme of sexual violence against women in his books.

Lisbeth Salander and Mikael Blomkvist are the primary characters in the series. Lisbeth, a woman in her twenties is an intelligent, eccentric, and possessing of a photographic memory. Blomkvist is an investigative journalist, a celebrity in his own right, whose history somewhat similar to Larsson's own.

About three-quarters of a fourth novel was written by Larsson before his sudden and unexpected death in November 2004. His partner, Eva Gabrielsson, is in possession of Larsson's notebook computer containing the manuscript; unconfirmed outlines or manuscripts written by the original author for one or two more books may still exist.

According to Charles McGrath's New York Times article "The Afterlife of Stieg Larsson", approximately 27 million copies have been sold worldwide as of May 2010.

Yellow Bird, a Swedish film production company, has produced film versions of the Millennium Trilogy, which were co-produced with Nordisk Film and Television, a Danish film production company. These films were released in Scandinavia in 2009, and an extended version of the films at approximately 180 minutes each were shown as a six-part miniseries on Swedish television in 2010 (each film in two parts). This extended version of the films was released on July 14, 2010 on DVD and Blu-ray. Only the first film was originally meant for theatrical release, with the final two conceived as TV movies, but after the tremendous success of the first film this was changed in favor of three full theatrical releases. Niels Arden Oplev directed the first film, wirh the next two directed by Daniel Alfredson. The screenplays for "Dragon" and "Fire" were adapted by Nikolaj Arcel and Rasmus Heisterberg, and "Hornet" by Ulf Rydberg and Jonas Frykberg. The main characters of Mikael Blomkvist and Lisbeth Salander are played by Michael Nyqvist and Noomi Rapace respectively in all three films feature.

Yellow Bird has recently partnered with Sony Pictures to produce an American adaptation of the trilogy. The films are set to be written by Steven Zaillian, directed by David Fincher and produced by Scott Rudin, with Daniel Craig as Mikael Blomkvist and Rooney Mara as Lisbeth Salander.

Retrieved from "https://millenniumtrilogy.fandom.com/wiki/Millennium_Trilogy?oldid=6558"
Community content is available under CC-BY-SA unless otherwise noted.