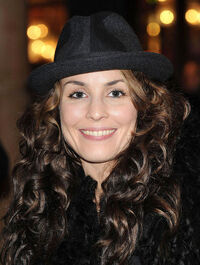 Noomi Rapace (born December 28, 1979) plays Lisbeth Salander in the 2009 Swedish film adaptation of The Girl with the Dragon Tattoo.

At the age of seven, Rapace was given a non-speaking part in the film Í skugga hrafnsins by Hrafn Gunnlaugsson. This experience made her decide to be an actress. She left home at age 15 and enrolled in a Stockholm theater school. In 1996, she made her TV debut playing the part of Lucinda Gonzales in the TV series Tre kronor. From 1998 to 1999, Rapace studied at Skara Skolscen. She has been engaged at Theater Plaza 2000–2001, Orionteatern 2001, Teater Galeasen 2002, Stockholms stadsteater in 2003 as well as at the Royal Dramatic Theatre. She drew acclaim for her award-winning portrayal of a troubled teen mother in the 2007 Danish film Daisy Diamond. She then acted in sherlock holmes : Game of shadows. In 2011 she starred as Dr. Elizabeth Shaw In th sci fi film Prometheus