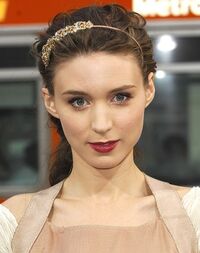 Rooney Mara (born Patricia Rooney Mara on April 17, 1985) plays Lisbeth Salander in the 2011 movie adaptation of The Girl with the Dragon Tattoo.

Mara made her professional acting debut in a bit-part in the 2005 direct-to-video horror film Urban Legends: Bloody Mary, which starred her sister, fellow actress Kate Mara. She found work in television, appearing on the New York City-based drama Law & Order: Special Victims Unit in 2006, as a girl who dislikes fat people. She guest-starred on the legal drama Women's Murder Club in 2007, and played a drug addict in an episode of The Cleaner in 2008. Mara appeared in the feature films Dream Boy and Friends (With Benefits) that year, and guest-starred as Megan for two episodes of NBC's ER in 2009.

Mara landed her first lead role in the film Tanner Hall, starring Amy Sedaris and Tom Everett Scott, a story of four teenage girls set in a New England boarding school. Mara played Fernanda, who has an affair with a married family friend (Tom Everett Scott). The coming-of-age film was the debut feature by filmmakers Tatiana von Fürstenberg and Francesca Gregorini. Mara dropped her first name, Patricia, to be known professionally by her middle name after working on the project. "I never really liked my first name," Mara stated to Paper magazine. "I never felt like a Tricia. And Rooney is more memorable".

Mara's experience lead to other film work. She appeared in the comedy Youth in Revolt, starring Michael Cera and directed by Miguel Arteta, based on the 1993 cult novel of the same name by C.D. Payne. Mara played Taggarty, the love interest of Cera’s best friend. Her character tries to sleep with 50 guys befoe she goes to college. Mara had auditioned for the starring role, but was offered the smaller part when the lead went to Portia Doubleday.

Mara appeared in the 2009 independent film Dare as Courtney, the best friend of Alexa (Emmy Rossum), a high school student set on expanding her life experience. She also filmed The Winning Season that year, starring Emma Roberts and Sam Rockwell, playing a high school basketball player in a story similar to The Bad News Bears. Her character has an affair with a 40-something year old shoe salesman (Kevin Breznahan). Dare and The Winning Season premiered at the 2009 Sundance Film Festival. Mara was included on Filmmaker magazine's list of "25 New Faces of Independent Film" that year.

Mara starred in A Nightmare on Elm Street, a 2010 remake of the 1984 horror film of the same name. She played the protagonist Nancy Holbrook, based on the original film's Nancy Thompson, a teenage girl who is eager to leave town after graduating from high school. Mara began shooting the film in Chicago on May 5, 2009, directed by Samuel Bayer. Mara told Filmmaker that she felt that the remake's Nancy was "completely different from the original" and could be described as "the loneliest girl in the world". The film was released on April 30, 2010. Depending on its box office performance, Mara will appear in a sequel to the remake, continuing her role as Nancy.

Mara appeared at the Hamptons International Film Festival in October 2009 as part of its Breakthrough Performers Program, where she was tutored alongside Zach Gilford, Emmy Rossum and Emma Stone by Sharon Stone. In October 2009, Mara shot the independent feature Kaboom, written and directed by Gregg Araki, about the sexual awakening of a group of college students. She joined Roxane Mesquida, Thomas Dekker, and Kelly Lynch in the cast of the film. Mara appears in the 2010 film The Social Network by David Fincher, starring Jesse Eisenberg, Andrew Garfield, Brenda Song and Justin Timberlake. Her character breaks up with Mark Zuckerberg, the founder of Facebook, which inspires him to start the social networking website.

In August 2010, Mara won the role of Lisbeth Salander over several other actresses in the upcoming Sony Pictures film adaptation of Stieg Larsson’s Millennium Trilogy series of books. David Fincher will direct the first of three films, based on the novel The Girl with the Dragon Tattoo, with Scott Rudin producing; The Girl Who Played with Fire and The Girl Who Kicked the Hornets' Nest will also be adapted. Fincher convinced executives at Columbia Pictures to cast Mara in the film. She will play damaged bisexual computer hacker Lisbeth Salander who helps journalist Mikael Blomkvist (Daniel Craig) attempt to solve a series of murders. The film began shooting in Sweden in September 2010, and has a release date of December 21, 2011. Mara doesn't consider the film to be a remake, but an interpretation of the novel. "I plan on giving my interpretation of the character", she stated to Variety. Mara's performance as Lisbeth Salander has earned her critical praise as well as nominations for both a Golden Globe and an Academy Award.

Retrieved from "https://millenniumtrilogy.fandom.com/wiki/Rooney_Mara?oldid=5373"
Community content is available under CC-BY-SA unless otherwise noted.