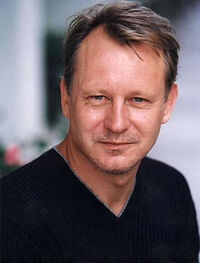 Stellan Skarsgård plays Martin Vanger in the 2011 movie adaptation of The Girl with the Dragon Tattoo.

Skarsgård started his acting career early. At the age of 20 he already had a great deal of experience in film, TV and stage. Most of his early roles were in Swedish TV (such as Bombi Bitt) and movies.

To foreigners Skarsgård is particularly associated with director Lars von Trier. He appeared in three of the Danish auteur's features including The Kingdom, Breaking the Waves and Dogville. His most personal working relationship, however, is with Norwegian director Hans Petter Moland. Relevant films here are Kjærlighetens kjøtere, Aberdeen and A Somewhat Gentle Man (2010). Skarsgård considers Moland a close friend. Before shooting their next project in 2009 he said of their relationship: "We're like an old married couple and I get separation anxiety." Aside from these, his best-known Scandinavian work is probably his leading role in another Norwegian film as the guilt-ridden policeman Jonas Engström in the original Insomnia.

He was considered for the role of Oskar Schindler in Schindler's List. Skarsgård reported that people often mistook him for Liam Neeson who portrayed Schindler in the film. Skarsgård would in fact replace Neeson in Exorcist: The Beginning (2004). He had a guest stint on the HBO TV Series Entourage as Verner Vollstedt, the German director of the fictional film Smokejumpers who has a bias against the main character Vincent Chase, one of the stars of the film.

According to Swedish news site Ystads Allehanda, Skarsgård has joined the cast of Thor in an unspecified role.