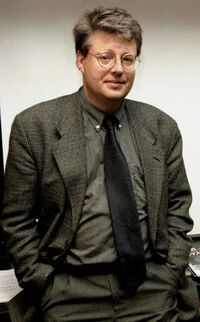 Full Name
Karl Stig-Erland Larsson
Born
August 15, 1954
Skelleftehamn, Sweden
Died
November 9, 2004
Stockholm, Sweden
Nationality
Swedish
Occupation
Journalist, Novelist
Genre
Crime / Mystery
Notable Work
The Millennium Trilogy
Karl Stig-Erland Larsson (known to the world as author Stieg Larsson) was a Swedish journalist and writer, born August 15, 1954 in Skelleftehamn outside Skellefteå in Sweden. He is best known for writing the Millennium Trilogy of crime novels, which was published posthumously. Four years after his death, he was the second best-selling author in the world in 2008, behind Khaled Hosseini, and by March 2010, his Millennium trilogy had sold over 27 million copies in more than 40 different countries.

Larsson's first name was actually Stig which is the standard spelling, however in his early twenties, he changed it to avoid confusion with his friend Stig Larsson, who went on to become a famous author many years before Stieg did. At the time, the two friends were amateur photographers and with such similar names, they wished to prevent any misunderstanding. At this point, neither had yet to published a book, but they wished to avoid confusion as they were working in the same field. Stieg, in later years, would tell the story that the two men had tossed a coin to decide who was to change his name, but this account is disputed by Stig Larsson. Unable to avoid all confusion, the pronunciation of both versions is the same regardless of spelling.

As an activist and journalist:Edit

Larsson started out as a political activist for the Kommunistiska Arbetareförbundet (Communist Workers League), as well as a photographer, and proclaimed himself one of Sweden's leading science fiction fans. Politically, he was the editor of the Swedish Trotskyist journal Fjärde Internationalen, a journal of the Swedish section of the Fourth International. He was also a regular writer for the weekly Internationalen.

In 1977, Larsson spent time training a squad of female Eritrean People's Liberation Front guerrillas in the use of grenade launchers in Eritrea until he was forced to abandon that work dafter having contracted a kidney disease. After his return to Sweden, he found work as a graphic designer at the largest Swedish news agency, Tidningarnas Telegrambyrå (TT) between 1977 and 1999.

Larsson's political convictions and journalistic experiences led him to found the Swedish Expo Foundation, an organization similar to the British Searchlight Foundation. This was established to "counteract the growth of the extreme right and the white power-culture in schools and among young people." He also became the editor of the foundation's magazine, Expo, in 1995.

In his off time, he worked on his own independent research project chronicling right-wing extremism in Sweden. His research resulted in his first book Right-wing extremism ("Extremhögern") in 1991. Larsson would quickly become instrumental in the documentation and ultimate exposure of Swedish extreme right and racist organizations. He was also an influential debater and lecturer on the subject, reportedly living for years under death threats from his political enemies. 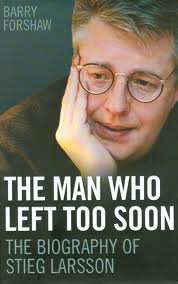 Upon his unexpected death, Larsson left behind manuscripts of three completed but unpublished novels in an unnamed series. He had written them for his own pleasure in his spare time after returning home from his job in the evenings, and made no attempt to have them published until shortly before his death. The first was published in Sweden in 2005 as Män som hatar kvinnor ("Men who hate women"), published in English as The Girl with the Dragon Tattoo. It garnered the prestigious "Glass Key" award as the best Nordic crime novel in 2005. Following in suit, his second novel, Flickan som lekte med elden (The Girl Who Played with Fire by it's English title), won the Best Swedish Crime Novel Award in 2006. The third novel in the Millennium trilogy, Luftslottet som sprängdes ("The air castle that was blown up"), published in English as The Girl Who Kicked the Hornets' Nest, was published in the United States in May of 2010.

Larsson left about three quarters of a fourth novel on a notebook computer, now possessed by his partner, Eva Gabrielsson; synopses or manuscripts of the fifth and sixth in the series, which he intended to contain an eventual total of ten books, are also rumored to exist.

The Swedish film production company Yellow Bird has produced film versions of the Millennium Trilogy, co-produced with The Danish film production company Nordisk Film and TV company, which were released in Scandinavia in 2009. Sony Pictures Entertainment has obtained the rights to make its own big-budget English language version of the trilogy, news which has received mixed reactions from fans of the series.

Larsson died in Stockholm November 9, 2004 at the age of 50 of a sudden heart attack. Rumors continue to circulate, because of death threats received as editor of Expo, that his death was in some way induced. These theories have always been denied by Eva Gedin, his Swedish publisher.

In May 2008 it was announced that an alleged will had been found, written in 1977. In the will, which surfaced suspiciously soon after Larsson's death, "Larsson" declares that his wish is to leave his assets to the Umeå branch of the Communist Workers League (now the Socialist Party). Since the will was not witnessed, it was not valid under Swedish law, and as a result all of Larsson's estate, including future royalties from book sales and films, go to his father and brother. Larsson's long term lover Eva Gabrielsson (pictured), who found the will, has no legal right to the inheritance, sparking controversy between her, and his father and brother. According to reports, the two never married because it would have been a security risk since, under Swedish law, couples entering into marriage are required to make their current addresses publicly available. Owing to his reporting on extremist groups and the death threats he had received, the couple had obtained legal anonymity in regard to their addresses, personal data and identity numbers from public records, in an attempt make it harder for individuals in the public sector to trace them. This "identity cover" was crucial in his work as a journalist and would have been difficult to bypass if the two had lawfully married or become legally registered partners. A recent article in Vanity Fair magazine discusses Gabrielsson's dispute with Larsson's relatives, which has also been well covered in the Swedish press. In it, she claims the author had little contact with his father and brother and requests the rights to control his work so it may be presented in the way he would have wanted. Larsson's story was also featured on the October 10, 2010 segment of CBS News Sunday Morning. In this segment Larsson's family claims the fourth and as yet unpublished book is actually the fifth book.

Throughout his written works, as well as in several interviews, Larsson acknowledged that a significant number of his literary influences were American and British crime/detective fiction authors. Similarities can be drawn between Lisbeth and Carol O'Connell's "Mallory," who first appeared in Mallory's Oracle in 1994. In his own work he made a habit of inserting the names of some of his favorites within the text as an homage, sometimes even by making his characters actually read the works of his own favorite authors. Most notably were Sara Paretsky, Agatha Christie, Val McDermid, Dorothy Sayers and Enid Blyton. One of the strongest influences originates from his own country: Pippi Longstocking, by Sweden's much-loved children's author Astrid Lindgren. Larsson explained that one of his main recurring characters in the Millennium series, Lisbeth Salander, is actually fashioned on a grown-up Pippi Longstocking as he chose to sketch her.

There are also similarities between Larsson's Lisbeth Salander and Peter O'Donnell's Modesty Blaise. Both are women from disastrous childhoods who somehow survive to become adults with notable skills, including fighting, and who accomplish good by operating somewhat outside the law. One of Larsson's villains, Ronald Niedermann (a.k.a. "blond hulk"), has much in common with the invulnerable, sociopathic giant named Simon Delicata in the fourth Modesty Blaise book A Taste for Death.

As recounted by himself, when Larsson was 15 years old he witnessed the gang rape of a girl, which led to his lifelong abhorrence toward violence and abuse against women. The author never forgave himself for failing to help the girl, whose name was Lisbeth - like the young heroine of his books, who is also a rape victim. This haunting memory was what inspired the themes of sexual violence against women in his books.

Notably, Stieg Larsson was the first author to sell more than one million e-books on Amazon.com.

Retrieved from "https://millenniumtrilogy.fandom.com/wiki/Stieg_Larsson?oldid=6608"
Community content is available under CC-BY-SA unless otherwise noted.