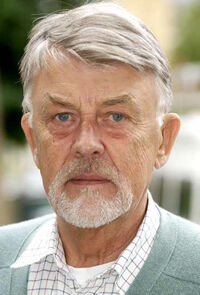 Sven-Bertil Taube plays Henrik Vanger in the 2009 Swedish film adaptation of The Girl with the Dragon Tattoo.

At age 14, Taube began playing guitar. While traveling throughout Europe, he developed an interest in folklore and folk music. He performed in concerts and on Swedish and Norwegian radio while a student at the Royal Beskow School in Stockholm.

Taube graduated in 1954 from the Cherry Lawn School in Darien, Connecticut. While a student at the school, Folkways Records invited him to record an album of Swedish folk songs.

Taube released his first album in 1954 with covers of his father's songs, and since then has recorded many albums including songs written by his father. Several of his most well-known versions of Evert Taube songs come from albums recorded in the 1970s, but he recorded more of them at later stages, including his 2007 album Alderville Road. Referring to that album, reviewer Peter Dahlgren said, "Evert had the yarns and Sven-Bertil had the voice." He has also recorded songs by the popular Swedish 18th-century songwriter Carl Michael Bellman, and the poet Nils Ferlin (1898–1961), whose poems were mostly put to music by Lille Bror Söderlundh. Taube also recorded an album with songs by the Swedish songwriter and musician Ulf Peder Olrog, one with Swedish translations of songs by French songwriter Léo Ferré, and one with Swedish translations of songs by Greek composer Mikis Theodorakis.