The Girl Who Kicked the Hornet's Nest (novel)

Edit
The Girl Who Kicked the Hornets' Nest 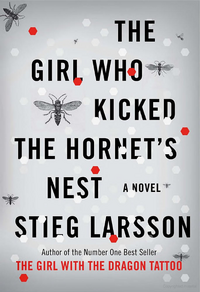 The Girl Who Kicked the Hornets' Nest (Swedish: Luftslottet som sprängdes, "The Air Castle That Exploded") is the third and final novel in the best-selling Millennium Trilogy by Swedish writer Stieg Larsson (although there are rumors of a possible fourth book). The Swedish title literally means "The Air Castle That Was Blown Up." The word Luftslott - meaning "air castle" - is the Swedish equivalent to a pipe dream. With the U.S. and Canadian editions, the title was changed to The Girl Who Kicked the Hornet's Nest, with "hornet" in the singular possessive form rather than plural.

Picking up right where "Fire" left off, the novel opens up as Lisbeth Salander is being flown to Sahlgrenska Hospital with bullets in her brain, hip, and shoulder (courtesy of her father, Alexander Zalachenko, and the events at the end of The Girl Who Played With Fire). Post-surgery, Dr. Jonasson, has her moved to an intensive care ward under armed guard, accepting visits from only the police, doctors, nurses, and her lawyer, Annika Giannini (Mikael Blomkvist's sister). During her recovery, Salander uses a Palm Tungsten T3 smuggled in by Dr. Jonasson to access the internet and also to compose an autobiographical document to aid in her defense at trial. The three murder charges against Salander are dropped, but she is charged with assault on the two biker gang members at Nils Bjurman's summer cabin.

Evert Gullberg, former chief of "the Section", a secret division of Säpo (the Security Police) visits Section headquarters to find out how they will be handling the unfolding Zalachenko affair. The Section had been responsible for the handling of Zalachenko affair from the very beginning (including having Salander committed when she was 12), and Gullberg is concerned that either Zalachenko or former Section associate Gunnar Björck will talk to the police about the Section's activities. Gullberg independently visits former Section associate Frederik Clinton to ask him to be acting head of the Section during the crisis; Clinton, who is on dialysis, reluctantly accepts.

Section operatives approach Prosecutor Ekström, who is in charge of the Salander case, and give him falsified evidence. After Gullberg determines that Zalachenko is not willing to "play ball" with them, he visits Zalachenko in the hospital and shoots him in the head before turning the gun on himself. Section operatives bug the phones of Giannini, Blomkvist, and Millennium's staff, and put Blomkvist under surveillance. They then steal the copies of a classified report Blomkvist and Giannini had obtained. After Blomkvist realizes he is being watched, he uses disinformation to confuse his watchers and also has Milton Security install cameras to figure out who is following him. He begins working and sleeping at Salander's secret apartment on Fiskargatan and has the Millennium offices manned 24 hours a day to ensure they aren't bugged.

Erika Berger leaves Millennium to be editor-in-chief at Svenska Morgon-Posten, Sweden's largest daily paper. Almost immediately, she begins receiving poison pen letters calling her "whore". After the letters escalate to the point where Berger's house is vandalized, Berger calls in Milton Security, who eventually discover the individual is Berger's assistant. After firing the individual, and although shaken, Berger goes back to work at the paper, although she later resigns after learning that the paper's CEO has been also running a manufacturing company that knowingly used child labor from Southeast Asia. She then returns to her former post at Millennium.

After Dragan Armansky tips him off to the reality of Salander's situation and to the existence of the Section, Säpo Constitutional Protection Director Torsten Edklinth decides to begin a secret formal inquiry into the matter. He asks his associate, Monica Figuerola, to assist him. They contact Inspector Bublanski to bring him and his team into the investigation. Figuerola also contacts Blomkvist to ask him to begin coordinating information between their two investigations. He agrees, and the two of them later begin a relationship.

Just before the start of Salander's trial, the Section realizes Blomkvist has been playing them and attempts to sabotage the special issue of Millennium being printed. When that doesn't work, they try to destroy Blomkvist's credibility and put a hit out on him. Neither tactic proves successful.

During Salander's trial, Giannini, with the help of Holger Palmgren, successfully discredits Teleborian's testimony about Salander's mental state and gets her released. Edklinth's unit arrests the entire roster of the Section. After a few months spent in Gibraltar checking up on her investments and a visit to Miriam Wu in France, Salander returns to Sweden and checks out an abandoned factory which came into her possession upon the death of her father only to find the fugitive Ronald Niedermann, her half-brother, who escaped from the police at the beginning of the book. After a brief struggle, Salander is able to subdue Niedermann, who is insensate to pain, by nailing his feet to the ground with a nail gun. After escaping she lures members of a motorcycle club Niedermann stole money from to the site, then anonymously tips police off as to Neidermann's location; the police raid results in the death of her half-brother and the capture of members of the outlaw gang. The leader of the biker gang, Sonny Nieminem, resists arrest and is shot to death in a gun battle.

Back at her upscale apartment in Stockholm, Lisbeth is visited by Blomkvist, who wishes to re-start their friendship. In a moment of reflection she realizes she fully trusts him and values his presence, but no longer feels any romantic attraction to him. Salander opens the door and invites Mikael in, accepting his offer.

The book has four sections, each one starts with an Epigraph- a short essay.