Start a Wiki
The Girl Who Played with Fire 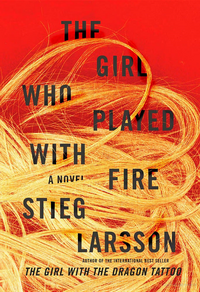 The Girl Who Played with Fire (original title in Swedish: Flickan som lekte med elden) is the second novel in the international best-selling Millennium Trilogy from Swedish author Stieg Larsson. It was published in Swedish in 2006 and in English in January 2009.

This second book features many of the characters that appeared in the first, among them Lisbeth Salander, the "Girl" of the title and a social misfit hacker, and Mikael Blomkvist, an investigative journalist and publisher of Millennium magazine.

The novel is formally divided into a prologue followed by four parts. The prologue of the book opens with a girl captured and restrained inside a dark room by an unidentified male. To cope with being captured, she mentally replays a past episode when she threw a milk carton filled with gasoline onto another man inside a car and tossed an ignited match onto him.

Lisbeth Salander, after finishing the job on the Wennerström affair (described in The Girl with the Dragon Tattoo), disappeared from Sweden and traveled throughout Europe. The novel opens with Salander at the shores of the Caribbean in St. George's, the capital of Grenada. She has become interested in Fermat's Last Theorem and mathematics, an interest that resounds with the opening page of each Part in this novel. From within her room in her hotel she observes on several occasions that her neighbor, Dr. Forbes, an American tourist from Texas, physically abuses his wife next door to her room. She also befriends George Bland, an introverted sixteen year old student living in a small shack, and she begins tutoring him in mathematics. Salander finds Bland's company relaxing and enjoyable because Bland does not ask her personal questions, and the two develop a sexual relationship.

Lisbeth Salander utilizes her connections among the hackers' network to investigate Dr. Forbes and learns that Reverend Robert Forbes was once accused of mishandling of funds in his faith-based foundation. Currently he has no assets, but his wife is the heir of a fortune worth $40 million. Due to concerns for safety, the residents at the hotel begin to enter the hotel cellar as a hurricane hits Grenada. Salander remembers Bland and braves the strong wind and rain to collect him. As the two reach the hotel entrance, Salander sees Dr. Forbes on the beach with his wife and realizes that he is attempting to kill her. Bland follows Salander to Mrs. Forbes, and Salander violently strikes Dr. Forbes with an iron pipe. Lisbeth Salander, George Bland, and Mrs. Forbes successfully reach the cellar and receive medical care, while Dr. Forbes is later confirmed to have died during the night while outside in the open.

Part 2 - From Russia with Love Edit

The second part opens with Lisbeth Salander returning to Stockholm. Immediately before the Wennerström affair became public knowledge, Salander laundered a sum of three billion kronors into a disguised bank account. With this sum she purchases a new up-scale apartment outside of Mosebacke Torg and moves out of her old apartment in Lundagatan. Salander sells half of her old apartment to Miriam Wu, a sex partner from her past, for the price of 1 kronor, under the condition that Wu forwards all of her mail.

Nils Bjurman, Salander's legal guardian, after the events of The Girl with the Dragon Tattoo, continues to brew a growing hatred for his ward. The hatred has slowly caused him to diminish his practice down to a single client -- Lisbeth Salander, with a singular goal of capturing her and destroying the CDs. He scrutinizes Salander's medical records, identifies an incident named "All the Evil" as well as a person from her past as his strongest ally.

In the meantime, Mikael Blomkvist, the publisher of Millennium magazine, has lost all contact with Salander for over a year, as she has refused to even open his letters. He is approached by Dag Svensson, a young journalist who has written a meticulously researched thesis about sex trafficking in Sweden and the abuse of underage girls by high-ranking figures. Blomkvist immediately throws himself into the investigation, planning to run Svensson's story in an upcoming issue of Millennium. On the other hand, Salander hacks into Mikael Blomkvist's computer and learns of the publication. She becomes intrigued by the name "Zala." However, shortly before the printing of the story, Svensson and his partner are shot dead in their Stockholm apartment, and Salander is missing. Salander's fingerprints are found on the murder weapon.

Blomkvist notifies Erika Berger, the editor in chief of Millennium and his occasional lover, of the double murders the same night. Next morning, the magazine office holds an emergency meeting to postpone the publication of Svensson's book and the associated magazine special. Instead, the staff decides to backtrack Svensson's research to ensure the accuracy of the material, and to comb through it for possible murder motives. Blomkvist decides to finish Svensson's book.

Prosecutor Richard Ekström assembles an investigation team, led by Inspector Jan Bublanski, who demands that Sonja Modig be included in the team. The team identifies Salander's fingerprints on the murder weapon. They find Salander's formal record which establishes her as a violent, unstable, psychotic woman with a history of prostitution, and is currently linked to Armansky at Milton Security and Bjurman. The stark contrast between Armansky's trust in Salander's high intelligence and her official records surprises Bublanski. Bublanski then visits Blomkvist and Berger, who are puzzled by Salander's psychiatric history and her involvement with the murders, but Blomkvist also insists that she has no cognitive or moral deficits. While investigating her social circle, Modig finds Bjurman shot dead in his apartment, with Salander being the prime suspect. In the light of these new data, Ekström holds a press conference and discloses Salander's name and psychiatric history to the press.
Blomkvist enlists the help of managing editor Eriksson to investigate the murders, during which he realizes that Salander has hacked into his notebook computer. He reaches out to her through his computer, and she points him to "Zala." He confronts Gunnar Björck, a policeman on sick leave and a john in the sex trade, who agrees to disclose information about Zala if Blomkvist agrees to leave him out of Svensson's book.

On the other hand, Milton Security becomes involved in the investigation as Armansky decides to send Hedström and Bohman from Milton Security to aid the formal police investigation. Miriam Wu returns from a Paris trip to find herself taken to the police station and confirms Salander's intelligence and moral character. However, Hedström leaks Wu's identity into the press, and the press publishes extensively about Wu's ownership of a Gay Pride Festival. The press also publishes about Salander's past from childhood to 11, and from 14 onward. Part 3 closes with Salander noting that the source who has been leaking information to the press specifically supressed information about a key event she calls "All the Evil."

Blomkvist enlists the help of Paolo Roberto, a boxing champion, who used to spar with Salander in training. Roberto seeks out Miriam Wu for a conversation. In the meantime, on Salander's suggestion Blomkvist focuses onto Zala as the key connection between the three murders and sex trafficking. As the police continues the investigation, Blomkvist's team also notices a gap in Salander's biography. Blomkvist decides to confront Björck and trade his anonymity for information on Zala.

Roberto witnesses Wu kidnapped into a van by a blonde giant. He follows the van out to a warehouse south of Nykvarn, where he successfully rescues Wu by boxing with the blonde giant. He finds his opponent unusually muscular and insensitive to pain, but was able to stun the giant with hitting him on the head with a wooden plank. Both Wu and Roberto sustain heavy injuries but are able to escape. The giant later torches the warehouse to remove all evidence.

Visiting Bjurman's summer cabin, Salander finds the missing set of her information and begins to make the connection between Bjurman and Zala. According to the information, Zalas real name is Alexander Zalachenko. She defeats two members of Svavelsjö MC, a known motorcycle gang responsible for her earlier assault and Wu's abduction, one with a pepper spray and the other in close-quarter combat (she runs at the second and tases him in the crotch and then kicks him the face rendering him unconcious).

In the meantime, Blomkvist finds Salander's old keys which he picked up when she was first assaulted. He manages to find her new, up-scale apartment as well as Bjurman's DVD. Björck's testimony reveals that Zalachenko was a Russian defector under secret Swedish protection, who later began to traffick sex slaves. He learns that the blonde muscular man goes by the name Ronald Niedermann and was connected to the murders. He finds an address in Göteborg.

Salander also learns of the blonde giant's identity and his connection to an address at Göteborg. With Blomkvist behind her on the same trail, Salander heads for Göteborg. The reader learns that Zalachenko is Salander's father, and she had tried to kill him when she was 13 with fire in an incident that came to be referred to as "All the Evil." The incident was intentionally covered up because of Zalachenko's identity.

Zalachenko identifies Salander through motion detectors and cameras, and he captures her. He tells Salander that Niedermann is her half-brother. When Salander attempts to escape, Zala shoots her in the hip, shoulder and head with a Browning .22, which is a very weak gun that doesn't kill her. Niedermann buries her alive, but she digs herself out and again attempts to kill Zala with an axe. On his way to Göteborg, Blomkvist sees Niedermann trying to catch a ride with him. He catches Niedermann by surprise and captures him, tying him against a signpost by the road. The book ends as Blomkvist finds Salander and calls 112 (Swedish emergency services number).

Retrieved from "https://millenniumtrilogy.fandom.com/wiki/The_Girl_Who_Played_with_Fire_(novel)?oldid=5914"
Community content is available under CC-BY-SA unless otherwise noted.