The Girl with the Dragon Tattoo is the Swedish film adaptation of the book of the same name. It was directed by Niels Arden Oplev and released in 2009 to Swedish cinemas.

In 1966, 16-year old Harriet Vanger disappeared without a trace from a family gathering on the island owned by the powerful Vanger family. Nearly 40 years later, disgraced magazine journalist Mikael Blomqvist is contacted by Harriet's uncle, powerful industrialist Henrik Vanger, who asks him to write the history of the Vanger family and find out what happened to Harriet. Joining forces with troubled young computer hacker Lisbeth Salander, Mikael starts to delve into the past of the Vanger family – and unearths a history more sinister and violent than he could ever have imagined.

Differences between the book and the film[]

Mikael's Love Life
In the book, he's characterized as a womanizer. This is also shown in the fact that he's been the lover of Erika Berger for about 20 years. Her husband knows about this and puts up with it, while Mikael's marriage broke up several years ago because of his affair. Cecilia Vanger falls for him as well. This affair of course has an influence on Mikael's investigations - over the course of the book, Cecilia becomes one of the main suspects - "surprisingly", she then can't be reached by Mikael for a long time.

In the movie version, there are a few sex scenes of Mikael and Lisbeth, but that is pretty much it about Mikael's love life. In the movie he's far more focused on his investigations. 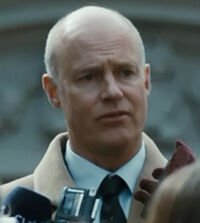 The traitor at Millennium
Mikael Blomkvist only has to find the missing girl Harriet because he is lured by compromising evidences after loosing a lawsuit against financial mogul Hans-Erik Wennerström. Even though this is revealed in the movie version, too, there are only vague suggestions to why Mikael lost the lawsuit. The faked documents that made him loose in court were actually submitted by a traitor in Millennium's editorial department. In the book, that traitor (Janne) is characterized as a pretty weird loner. In the end you get to know, that he passed on all the important information to Wennerström - even during the investigations. The huge revelation at the end of the story is possible, because they found out about his espionage at Millennium. From then on, he's only given faulty information. In the movie, there's no mentioning of the traitor at all. Here, the twist at the end is a result of Lisbeth's researches - there are no stumbling blocks over the course of the release.

Henrik Vanger
Henrik Vanger's character - the man who hired Mikael - in the book is described more detailed. At several points it is more than obvious that his actions are tactically clever. Officially, Mikael only obtains the order to write a family chronicle about the Vangers. His researches about Harriet's disappearance on the little island should be kept secret. Of course, that only works out for a short while. When he finally comes up with the serial killer revelation, Henrik decides not to release the family chronicle that was written at the same time. Accompanied by this he's told to stay in Hedeby for 12 months (and not 6 like it's said in the movie). Furthermore, Henrik closes a deal with Erika (who should become a shareholder/financial supporter of Millennium) behind Mikael's back. This would lead to a financial dependence which Mikael would not agree upon.

In the movie there's neither a mentioning of the deal with Erika/Millennium nor of the family chronical, making the research about Harriet Mikael only reason to go to Hedeby.

In the book you get to know something about Lisbeth's first caretaker Palmgren and several incidents at her school. The movie version unfortunately got rid of all this. Instead you get something different: There are several short flashbacks and indications of her most serious incident - at the age of 12, she set her father on fire in the car. Actually, Larsson saved this part of the plot up for the ending of the second novel (altogether with the father's identity) - in the first novel, this is not mentioned at all.

Mikael's love life (which was already mentioned) has an influence on Lisbeth's character. In the novel, she almost ends up with a change of mind. She also falls for Mikael's charme and actually considers to accept him as a friend (which would mean to let him get to know about her personal life). When she finally goes to his appartment with a little gift, she finds him and Erika arm in arm and therefore immediately scraps her emotions as a short moment of madness. This is also of importance for the second part: in the book, Lisbeth often feels deceived by Mikael which makes her consciously break off contact with him - even though she rather wants to stay in contact. The audience of the movie version - that does not know about her feelings - therefore has to assume that this impersonal behaviour is part of her personality (that was caused by her traumatic childhood).

Miscellaneous
Apart from that, there (of course) are further details that will occur to those who read the book. Here are some examples: The chronologic order of events very often differs from the book. Also, there are some more potential victims and therefore also more interviews with witnesses and also more researches by Mikael and Lisbeth. Harriet's niece Anita already died in the movie, while in the book she plays a major role for the solving of the whole case: only because of a bugged phone call by Anita (who still lives abroad) Mikael and Lisbeth are able to track Harriet down in Australia. In the movie they get to know about Harriet's whereabout through their investigations - Lisbeth's hacker-colleague Plague tells them, that there's a second "Anita" (= Harriet) Vanger who lives in Australia. Martin's death and his record of being a serial killer is investigated by the police - we don't get any further explanations. In the book, however, Lisbeth destroys a huge amount of the evidence while Mikael is out cold. Also, Lisbeth avoids any contact with the police. This leads Mikael into a crisis of conscience - he has some doubts about his work as a journalist, since he in the end has to conceal the truth. Lisbeth in the book visits her mother (who dies at the end of the book) several times in the mental asylum. However, in the movie she visits her mother for the first time shortly before the movie ends. In the second movie you're told that the mother passed away.