The Girl with the Dragon Tattoo (novel)

Edit
The Girl with the Dragon Tattoo 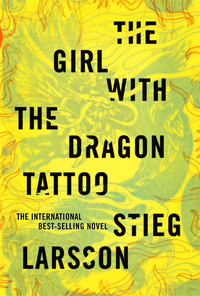 The Girl with the Dragon Tattoo (original title in Swedish: Män som Hatar Kvinnor – "Men Who Hate Women") is an award-winning crime novel by Swedish author and journalist Stieg Larsson, the first in his Millennium Trilogy.

Mikael Blomkvist, a middle-aged journalist who publishes the magazine Millennium in Stockholm, has just lost a libel case involving allegations about billionaire Swedish industrialist Hans-Erik Wennerström's unscrupulous activities, and is sentenced to three months incarceration. Facing professional disgrace and jail time, Blomkvist steps down from his position on the magazine's board of directors, despite strong objections from his longtime friend, occasional lover, and business partner Erika Berger. He is at this time offered a freelance assignment by Henrik Vanger, the elderly former CEO of Vanger Enterprises. Blomkvist accepts the assignment — unaware yet that Vanger has commissioned a comprehensive investigation into Blomkvist's personal and professional history, to be carried out by the gifted private investigator Lisbeth Salander.

On the tiny island of Hedeby, several hours from Stockholm, Blomkvist visits Vanger at his estate. The elderly Vanger tempts Blomkvist with promises of not only financial reward for the assignment, but also solid evidence that Wennerström is truly the criminal Blomkvist believes him to be. Under these conditions, Blomkvist agrees to his cover story of spending a year writing the Vanger family history in order to shroud his true assignment: solving the "cold case" of Vanger's great-niece Harriet's disappearance 40 years earlier. Vanger admits to being obsessed with her disappearance, and finding out the truth of what happened to Harriet, he also expresses his suspicion that Harriet was murdered by an unknown corrupt member of his family, many of whom were present in Hedeby on the day she went missing. Each year on his birthday Harriet gave Henrik a present of pressed flowers. Every year since Harriet's murder, Vanger explains, the murderer torments him with the same symbolic present of pressed flowers on his birthday.

Blomkvist leaves his life in Stockholm in the middle of one of the coldest winters on record, moving to Hedeby in order to begin the process of analysing the more than 40 years worth of information Henrik Vanger has obsessively compiled around the circumstances of the day Harriet disappeared. Hedeby is home to several generations of Vangers, all part owners in Vanger Enterprises. Under the pretext of researching the family history, Blomkvist acquaints himself with members of the extended Vanger family, and worried that he seeks to take advantage of the obsession of a sick old man, most of them resent his presence.

Salander, is assigned a new legal guardian in Nils Bjurman, who is a sadist - extorting sexual favors from her in return for access to her trust fund. Unaware that she is videotaping his actions, he eventually rapes her. Soon after, she retaliates by incapacitating and torturing him with a taser and tattooing "I am a sadistic pig and a rapist" on his chest. She then forces him to watch the recording of the rape, and threatens to make it public unless he arranges for her to have permanent control over her money.

Blomkvist immerses himself in the case in order to fulfill his contractual obligation, and after discovering that Salander has hacked into his computer, he convinces her to assist him with research. The newly formed team discovers entries in Harriet's diary that list the names of some missing local women whose cases correspond with Bible verses describing brutal forms of divine retribution. This leads them to suspect that they are on the trail of a serial killer who has remained anonymous for decades. Eventually they become lovers, but due to her past, Blomkvist has trouble getting close to Salander, a loner who treats everyone she meets with hostility.

In the end, the duo discover that Harriet's brother Martin, currently the CEO of Vanger Industries, has been raping and murdering women for years, having been groomed into serial murder by his father, Gottfried, who sexually abused both him and Harriet. Blomkvist attempts a confrontation with Martin, who in turn kidnaps his pursuer and takes him to a torture chamber hidden in Martin's house. Martin reveals that he is not responsible for Harriet's disappearance and presumed murder, but as Martin is about to kill Blomkvist, Lisbeth bursts in and attacks, rescuing him. Lisbeth frees Blomkvist as Martin escapes and flees in his car. She pursues him onto the highway on her motorcycle, only to see him kill himself by veering straight into a crushing head-on collision with a truck.

Blomkvist and Lisbeth realize that Harriet was not actually murdered, but instead ran away in order to escape from her brother, who had been sexually abusing her. With the help of Lisbeth's hacking skills and contacts, they manage to track her to Australia, where she now runs a sheep farming company. When finally confronted, she confirms their account of the case, but also reveals that she is the one who was actually responsible for the presumed accidental death of her father. Upon her return to Sweden, she is happily reunited with Vanger and begins to take a leading role in the newly leaderless family business.

Vanger's promises of evidence regarding Wennerström prove to have been mostly a lure for Blomkvist and are not especially significant. Using her investigative skills however, Salander breaks into Wennerström's computer and discovers that his crimes go beyond what Blomkvist's conviction of libel. Using the evidence his partner finds, Blomkvist publishes an exposé article and subsequent book which destroy Wennerström and catapult himself and Millenium to national prominence. 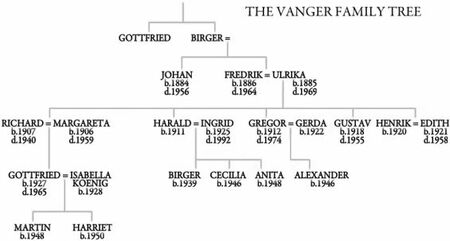